I wanted to look at the judges that we have up for retention this year and how they compare against other judges in the CCP. I was graciously provided with this data from Eamon Caddigan who took part in a datathon hosted by the kind (and extremely cool and smart) folks at R-Ladies Philadelphia. Anyway, let's dive in and see how these judges sentence folks in Philadelphia relative to their peers (we'll get to the there shouldn't be jails part later). The data I'm looking at is only for terms of confinement, not probation and parole. I've given the judges a head start by zeroing out time served and alternative remedies (even when they are patently inhumane - it was just far easier to clean the data). The TLDR is at the bottom, but generally speaking, I think my general philosophy of "kick them to the curb" holds true for at least this cohort of retentions. If you're wondering about that, I wrote a thing; gist is: always vote no on retention.

(Regarding the charts - if you're on desktop you can right-click, open in a new window, and they get large enough to pick through. On mobile, just pinch to zoom.)

In Pennsylvania, in general, felonies are sentenceable as follows:

Except as provided in 42 Pa.C.S. § 9714 (relating to sentences for second and subsequent offenses), a person who has been convicted of a felony may be sentenced to imprisonment as follows:

There are large caveats to this. For instance, Identity Theft, 18 § 4120 can be classified as a misdemeanor or felony. Within the felony spectrum, if you happen to identity-theft grandma, you can bump your "grade" (the classification) up by +1 (M1 ➝ F3) provided that grandma is over the age of 60, which means, again: generally, more jail time. In certain crimes, offenses within a grade can get kicked up a notch by doing a crime in a particularly heinous manner (I'm not giving examples).

All of this to say, there are large differences in crime "severity" and sentence time even within the same grade of crime.

At the top of the list are the F1 felonies. These are things like aggravated assault with a deadly weapon, distribution of drugs or trafficking and carry penalty of up to 20 years in prison, plus more if you do them often or with particular panache. 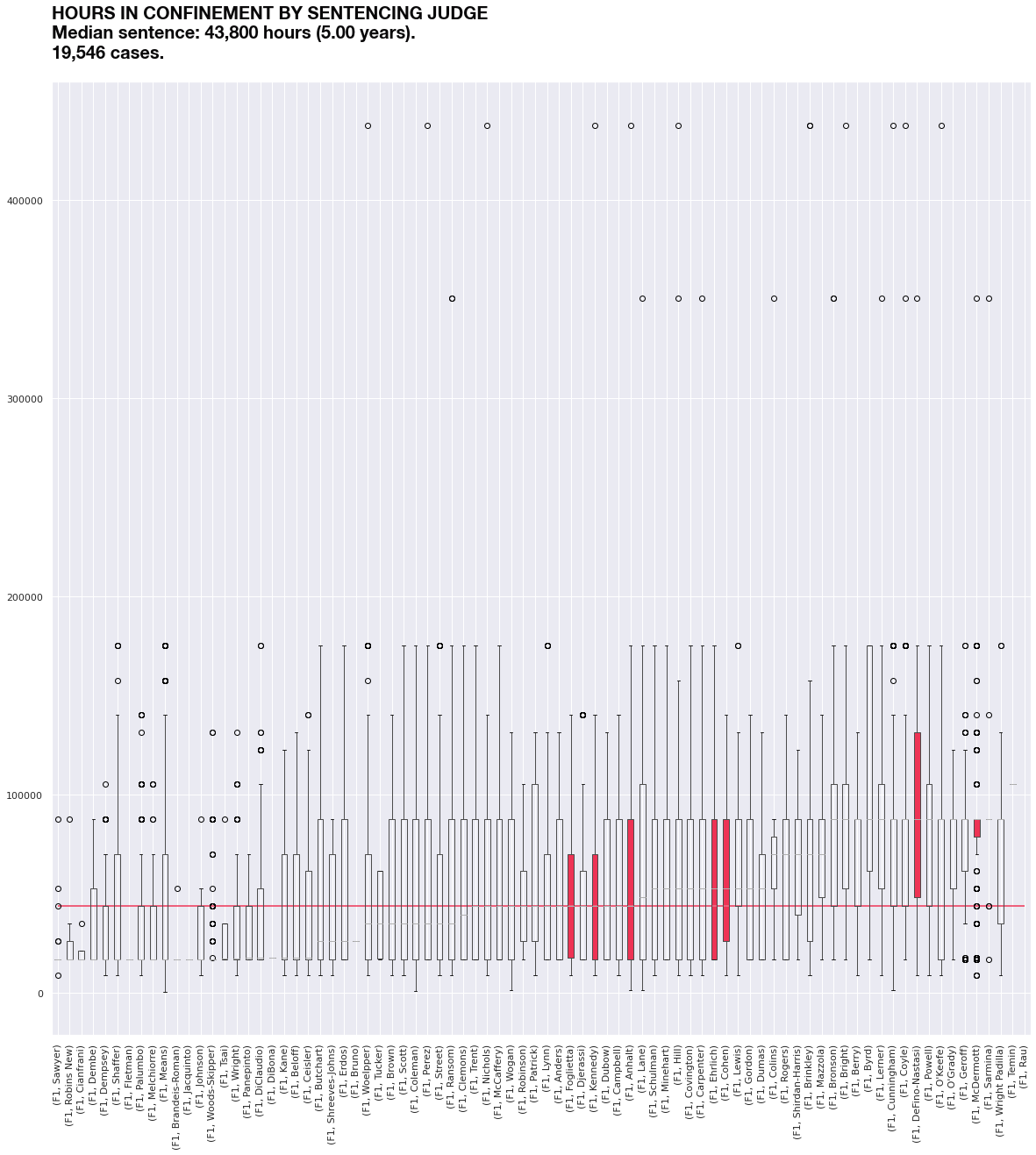 Sentences by Judge for F1 Felonies; y-axis is maximum hours under carceral supervision. Judges up for retention are highlighted. Red horizontal bar is the median.

Some caveats for the figure above: many judges have very few cases within each grade in the data, so those error bars can get large. Judges without any F1 sentences omitted.

Murphy, Overton, and Irvine had zero cases of grade F1 in the data. The only two judges who do not sentence defendants more harshly than their counterparts are Wright and Johnson. DeFino-Nastasi is the worst offender, doling out three times longer sentences than her peers. Oddly, Johnson, with the fewest F1 cases is far below the average, but with only 19 cases this could just be happenstance. Something to look into later.

Second degree felonies carry of up to 10 years in prison. Judge DeFino-Nastasi continues her lead as the worst of the over-sentencing judges, but the rest of the judges up for retention aren't as far behind. Judges Wright, Kennedy, and McDermott form a cluster around twice the length of sentence as their peers and the rest over around average. 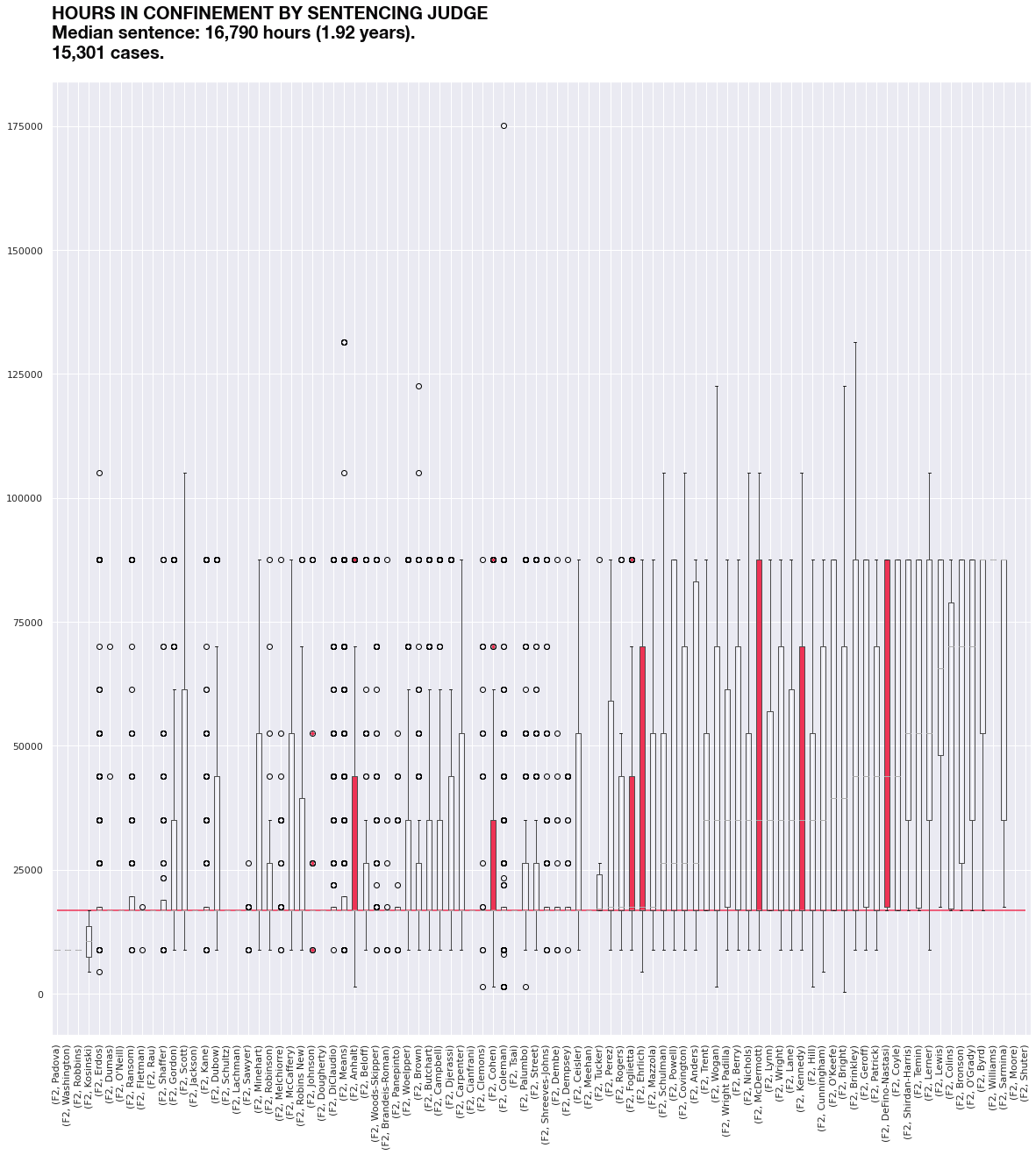 Sentences by Judge for F2 Felonies; y-axis is maximum hours under carceral supervision. Judges up for retention are highlighted. Red horizontal bar is the median.

Pennsylvania Felony 3 category will have a penalty of up to 7 years in prison. These are "crimes" like drug offenses, firearms, and being good at thefts. Again, DeFino-Nastasi comes in as the harshest with McDermott as close second. The rest of the pack hovers around average. 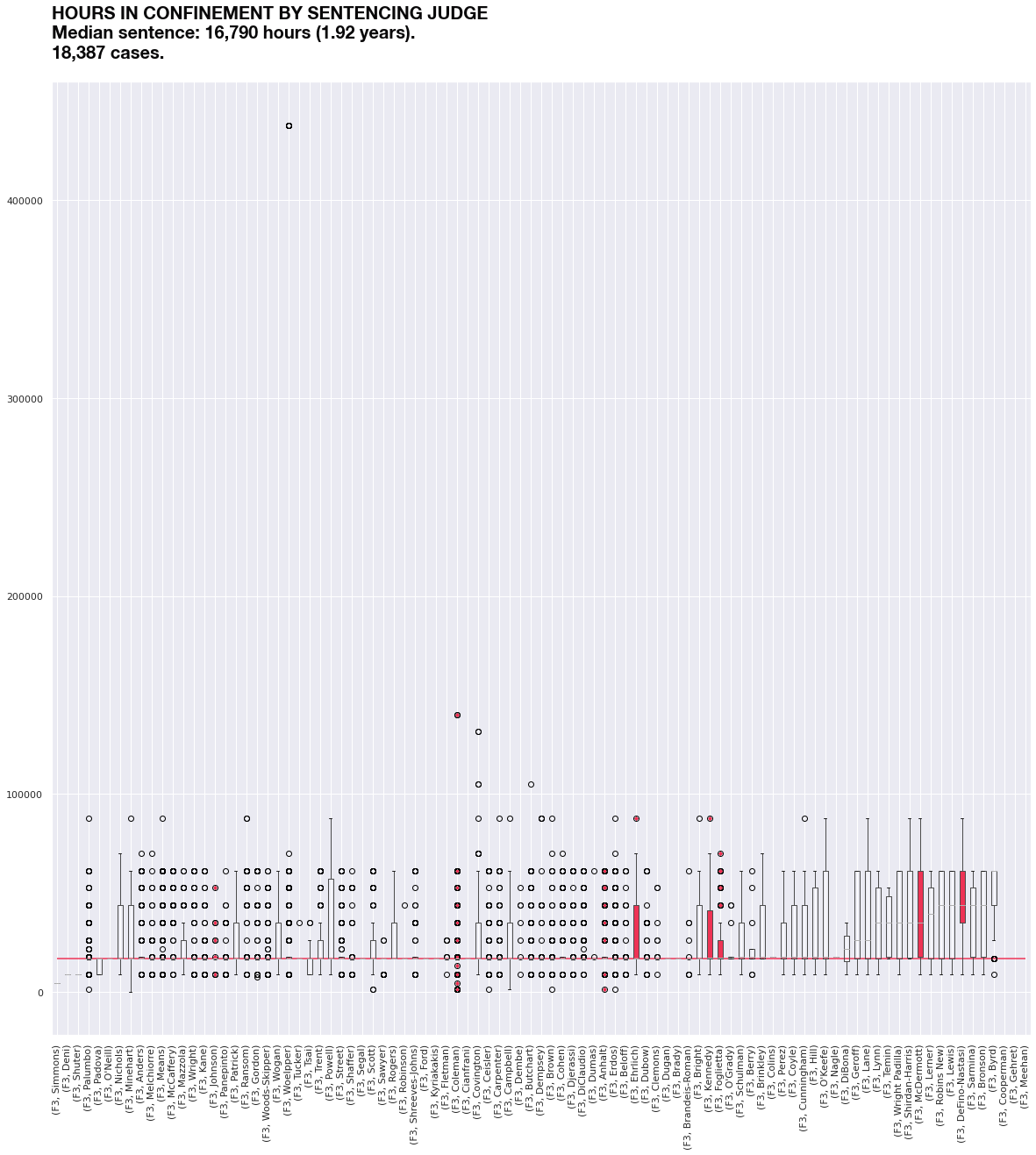 Sentences by Judge for F3 Felonies; y-axis is maximum hours under carceral supervision. Judges up for retention are highlighted. Red horizontal bar is the median.

Honestly, the numbers are kind of staggering to read. On the left we talk about prison abolition, but I think the scope (at least for me) is a little beyond comprehension. The nine judges above have handed down sentences that put our community members in cages for a total of 35,058 years. Go read Are Prisons Obsolete. It's good; it's short. Angela Davis writes far more convincingly than I ever could about the need to abolish the carceral state.

When Larry was elected, there was a big to do about prosecutors being required to state the cost of whatever jail sentence they sought. It's a good exercise. Philadelphia has a terribly neglected school system and most of us, for better or worse, think about spending in terms of "How much lead could this get out of our kids' school? How much asbestos?" It's a very Philadelphian thing. I don't get it, but it's nice; we care about our kids and the conditions they live in day in and day out - even if you don't have a school-aged child. So let's put this is monetary terms. I think those are fungible for this discussion.

Every year, Philadelphia takes some amount on money and, instead of spending on something important or good, we spend it on jailing people. In the current year, that's about $51,000, per person, per year. In total,

housing all of the city’s prisoners will cost Philadelphia’s Department of Corrections $2.4 billion for fiscal year 2018.

To put some of this in perspective, DeFino-Nastasi's harsh sentencing of F1 felonies (193 people) put our neighbors in jail for an extra 16,906,800 hours or nearly two thousand years. That's just 193 people. Many, many more have (and likely, will) be sentenced by equally appalling jurists. Bad judges have consequences. Just yesterday we learned that a judge in Kenosha will not allow prosecutors to use the word "victim" for the victims of a right wing murder if you need something else to be disgusted by.

In addition to the human costs of harsh sentences, the is a real economic loss for our city. DeFino-Nastasi's happy-go-lucky sentences - against just the 193 above - will cost the City $98 million over and above the average. To put that in perspective, that's about 2,028 teachers, school counselors, and nurses. So even if you're like "Eh, let them rot" (which, if you got this far, I doubt, if not, wtf is wrong with you?), there are real, direct economic costs for putting someone in jail. And this is just over-the-median sentence. In total, these judges (that we can fire) have caged people to the tune of $1.786 billion. It's almost a testament to the decades of divestment that our city has endured that that would only fix a little less than half of our failing schools, but there it is.

Thanks also to my extremely awesome public defender sister for providing background on felony grading in the Commonwealth. If you have the means and enjoyed this, please kick a few dollars into their bail fund.